I know I have used this blog in the past to say things I wasn’t willing to say to people in person. I can’t do anything if  you see yourself in any of this post, all I can say is that I am done with all of that and if you haven’t heard from me directly, this is no substitute, this is just the current state of affairs. This blog and this post is my truth and it is dedicated to anyone out there in despair or desperation, who isn’t understood, who is drowning in pain and confusion and has given up hope. 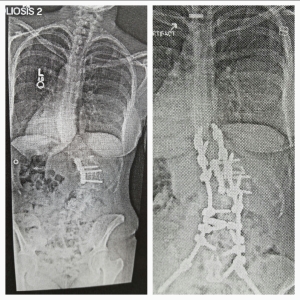 You are looking at 2 spine fusions.  It is now a year (June 1st) since the fusion revision – from the picture on the left to the picture on the right. Going back to my childhood, I have a large sample size of Bad Years to pull from and I can say, with zero doubts that June 2015 – June 2016 was one of the Worst Years. Worse than a double mastectomy, worse than chemo. So bad on so many levels it is in some ways, hard to quantify. People understand cancer (or think they do) but almost no one understands being fused into your pelvis. Very few people understand the nuances of scoliosis, that your spine can curve and rotate and cause such intense physical pain you pray you won’t wake up the following morning. The combination between the remnants of breast cancer (fatigue, no ovaries/estrogen, heavy implants and hair that never grew back in the same) and the physical limitations of a t10 -s1 fusion is no small thing to get used to.

Around April/May, I went on a trip to say goodbye to a dear family friend who was going into hospice. It was a somewhat stressful trip because I was going to go alone and meet my sibling but it turned into a family trip. My father is still very much in the middle of his legal issues and it has taken a huge toll on our family which isn’t quite functional to begin with. I returned from the trip with a nasty stomach virus and 2 weeks later I was unable to move my left leg other than my gluteal muscle and the ligament behind the knee.

For whatever reason, it has been next to impossible to get anyone, even Doctors to see this as a problem. If this were my right leg, I would be unable to drive. As it is, my movements which were already limited and full of pain have become exponentially more so……and it seemed the worse I felt, the less people cared. The first thing everyone and, I mean everyone from my husband to a surgeon have said is “you can’t tell”.

Only someone who has gone through trauma or pain that ‘doesn’t show’ can understand how awful it is to hear this, and even more awful to feel like you have to respond with a ‘thank you’. It is these and many other pressures I felt I had to maintain that led to me hitting absolute rock bottom.

I DON’T CARE WHAT IT LOOKS LIKE, I CARE THAT MY LEG DOESN’T MOVE NORMALLY

There comes a point in everyone who is going through hard times if they last long enough – you hit a wall and it doesn’t matter what you think you want or what expectations others have of you, you are done. Everything is overwhelming and involves over explaining except when you try to explain you see the eyes glaze over – in my case it’s like “oh my god, she has ANOTHER problem?”

Well trust me, it sucks even worse on this end. I became completely isolated, depressed and bitter. My family expected that this last surgery would be ‘the end’…. For me now, there is no ‘end’. I am permanently disabled. I don’t know where it came from because I was told about some of these limitations but there has been another expectation that “THINGS WERE GOING TO GO BACK TO NORMAL”

I spent a year pretending to be ok, and that is my fault and I take responsibility for it, but I can’t pretend anymore to spare someone’s feelings or live up to someone else’s expectations. Don’t you people think I wanted to be ‘done’? Wanted to be healthy and without pain?

I was so out of touch with my feelings, there really isn’t anything I did right….I say this not from a self pity perspective, but from the vantage point of hindsight and performing a logic equation of: how I felt + action taken to remedy said feeling = disastrous result that was the complete opposite of what I thought I wanted.

I have been in complete denial of how serious the problem in my spine is – in addition to tremendous pain, they now think that 2 of the levels (l4 -l5 which were the vertebrae that were in the worst shape, the l4 had slid over on top and to the side of l5 prior to this last surgery) have not healed which could mean a number of things, from another surgery, broken rods/hardware and I was warned to be extremely careful because if I fall, it is likely that I will break my hip.

I can’t eat regular food – ever since I had chemo, I am nauseous at the slightest variation in food. For the past 2 weeks, I have been living on popsicles and fruit. Whenever I have tried something else, I get sick.

I can’t bend or lift my left leg. I am completely sexually dysfunctional and am also physically limited by the structure of my spine when it comes to sex – there is a limit to how long I can lay on my back, particularly with heavy weight on top of it…..I am so limited in my movement’s there isn’t really room for a lot of creativity but between the menopause, the nerves that were cut out during the mastectomy – I can’t tell you how awful it feels to have giant implants squeezed, it highlights the loss of how wonderful it felt when I had breasts. I can’t be the only one – someone out there tell me I’m not the only one.

Why are these things not spoken about? I have very little pride left, I will talk about it – I wish there was something already there, but every where I turn I see bullshit, I hear bullshit – it’s ridiculous.

I had been moving along, 2 steps forward, one back but then the bottom fell out. I have had to commit to getting better no matter what it takes and no matter who is left standing in the end. I have left too much unsaid for too long, have tried too hard to live up to expectations of those who don’t even understand an iota of what this life is now like…… I have no idea where this is going, who I’m going to be when I get there or what I will be doing but circumstance and life have dictated that nothing is the same and nothing will be the same.

Everything that I held dear, gave me comfort or made me feel good is gone. In its place is a life of discomfort, pain, loneliness and isolation. I can’t change the first part, but the 2nd is going to have to go.

I invite anyone else who has chronic pain, who feels like no one understands to join me….. I understand, I get it – you are welcome here.